Biker who travels across India to save one-horned rhinos 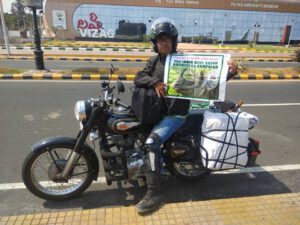 Gurugram: From the frozen Himalayas to the shores of Kanyakumari, through the planes and valleys, Julin Baruah rode his bike over 28,000 km in 230 days across 29 states and one Union territory of India.

While his friends and colleagues were in the safety of their homes and families, this 41-year-old ex-corporate man from Assam was alone on road for a noble cause–to spread awareness about conservation of the endangered one-horned rhinoceros.

According to government figures, 170 rhinos were poached between 2009 and 2015 at Assam’s Kaziranga National Park–the home to the rare one-horned rhino. In order to highlight this issue, Baruah has started his journey from Kaziranga.

With his savings and limited financial supports, he started his ‘Pan India Save Rhino Awareness Campaign‘ bike journey and travelled across every state of the country to raise awareness about the conservation of the Indian rhino and spread the message–how important wildlife is.

Baruah, who is also the president of the Guwahati-based Nature Care and Tourism Education Foundation, shared his experiences with UNI in an interview.

How did you get into the idea of a ‘bike journey campaign’ for the endangered rhinos?

The love for rhinos and the idea of conservation was within me right from my childhood. As you know the rhinos are our ‘pride’. Only five species of rhino are left in the world. They are also the only animals from Jurassic World.

In 2012, my two-year-old son was suffering from acute pneumonia and he underwent two surgeries at the Ganga Ram hospital in Delhi. Miraculously he was saved from the hands of death by the grace of almighty. As a thanksgiving, I decided to do something for the one-horned Rhinos, which are also going through a tough time.

Could you share some memorable events in your campaign?

Notably, I met Indian cricket team vice-captain Rohit Sharma, recently named the WWF-India Brand Ambassador for Rhino Conservation, who was in Guwahati for a match. I approached him to extend support towards the cause of rhinos. Interestingly, Sharma has pledged his support and has also promised to visit Kaziranga National Park, a UNESCO world heritage, in Assam. 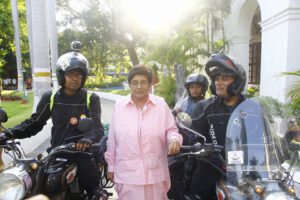 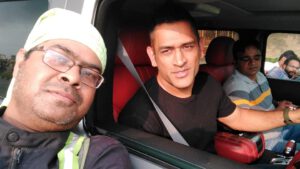 During the journey, I met and got appreciation from many dignitaries like Union Forest Minister Dr Harsh Vardhan, Ms Kiran Bedi and forest ministers of 17 states.

Integration of LGBT community in Indian workplace still a…

How did you plan the route of your trip? Did you find any hardships in the journey?

Initial days, the journey was very tough as I am not a ‘professional biker’. Roads were different and rough from states to states. I got a backache and other problems but then my body got accustomed to biking.

I started from Kaziranga to West Bengal through Jharkhand, Odisha and reached to southern states. After covering Andhra Pradesh, Telangana, Karnataka, Tamil Nadu and Kerala I have reached Kanyakumari –the southern tip of our country. From there I reversed and travelled to Gujarat and covered entire Northern India reaching Delhi then Jammu and Kashmir. After covering Himachal Pradesh, I finally reached the Northeast via Bihar.

I met with an accident and broke my left hand during a ride through the northeast. So I took a break for some days to travel to Arunachal Pradesh, the 29th state on my list.

Did you find support for your conservation campaign?

I met different people from different cultures. Especially, I have visited many temples and also a durgah and a church. I discussed with the heads of these institutions about my campaign. Since they are connected with a large section of followers or community members, these discussions were fruitful. I also found the natives residing around the conservation sites also very helpful.

Most of the natives are about the endangered animals in their localities. If proper training is given, they could be the best guides, or watchers or officials of the sites.

I remember an incident when I reached in Gir forests in Gujarat–the only place where you can find out Asiatic lions. The time was dark and I was proceeding to the park on my Enfield bike. Suddenly, I was stopped by a group of natives. They were not convinced by my identity initially, but later an official came to the spot and I told them about my story. They were stopping me to avoid any problem for the park.

In Kaziranga also the residents who stay nearby the park are aware about the importance of wildlife. They are protecting the park in a very well manner. They are also helpful in finding out poachers in the area.

What are the challenges of conservation?

Poaching is the main threat of the Rhinos. Though floods affect the rhino population, the main threats are the poachers who smuggle rhino horns to nearby countries, where people are having superstitious beliefs and misconceptions about rhino horns. It is estimated that the international market value of one horn is around five crore. Poaching has taken its toll on rhino population. Only 3,500 Indian one-horned rhinos left in Nepal and India.

How can we tackle the challenges? What’s your suggestion?

Of course, we need the help of our great force. Our Army is one of the most advanced forces in the world. Other than drone facilities which are used in Kaziranga, we need technologies like satellite navigation to tackle the poaching. Unfortunately, poachers have more sophisticated weapons than forest guards. Most modern vehicles and arms and ammunition also needed to stop poachers. The other thing is the forest guards who are doing exemplary services in the park are facing threats to their lives. Not only they deserve better financial perks but also should be motivated and trained under our Army’s technologies to tackle these anti-social elements. Natives also should be promoted as the caretakers of the area. If proper training is given, they could be the ‘eyes and ears’ of a conservation area. 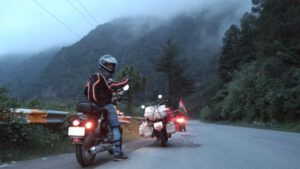 Get real time updates directly on you device, subscribe now.

Integration of LGBT community in Indian workplace still a…

Prev Next 1 of 101
You cannot print contents of this website.